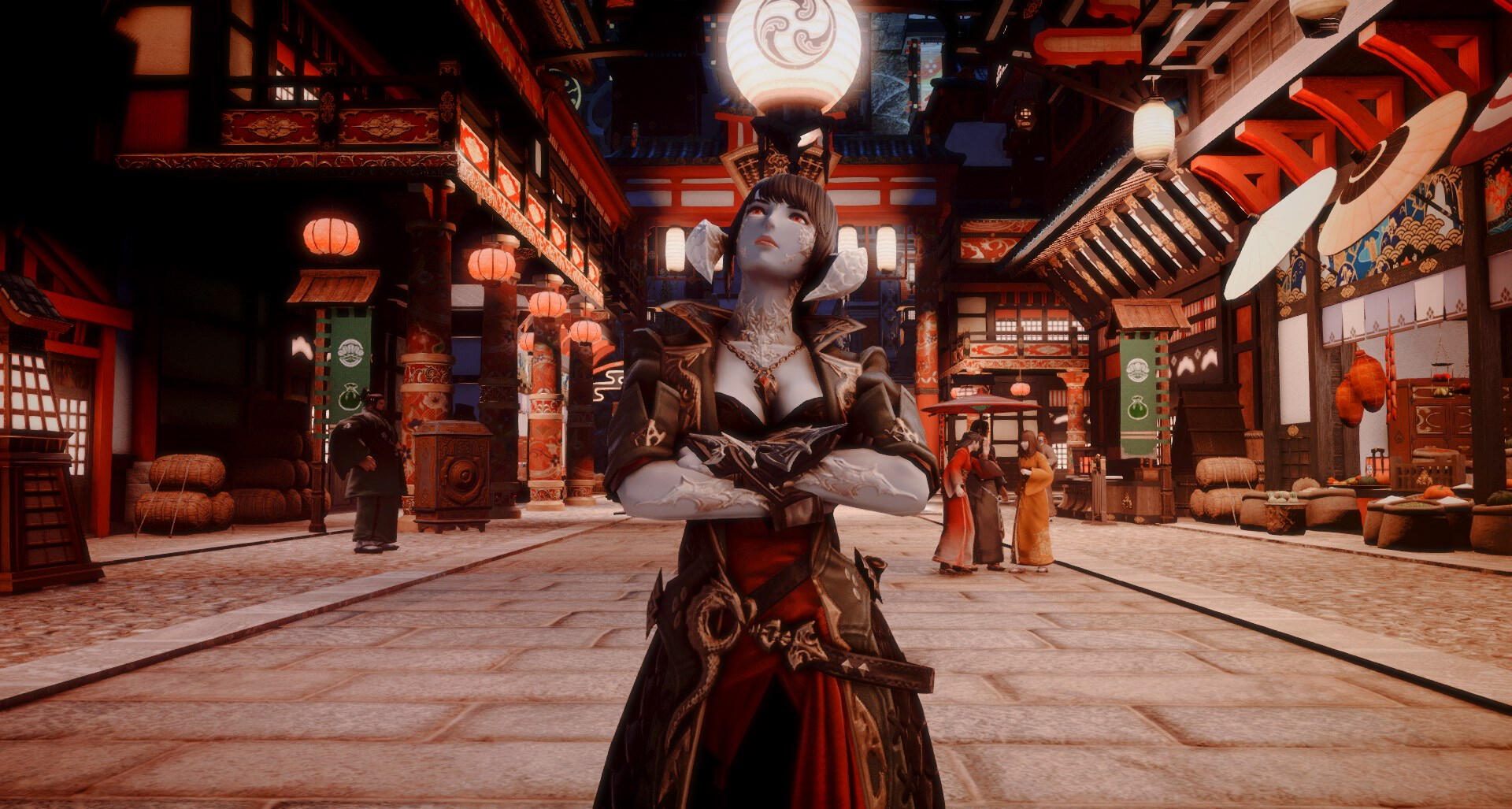 Determined to prove herself the one worthy of the Daisho family fortune, Kasumi is a risk-taking soul bubbling with confidence in every step. Setting forth into Eorzea with success on the mind, she's constantly adapting the ways of the west to her Far Eastern sensibilities - and proving to the world the quality of the Daisho tea trade. 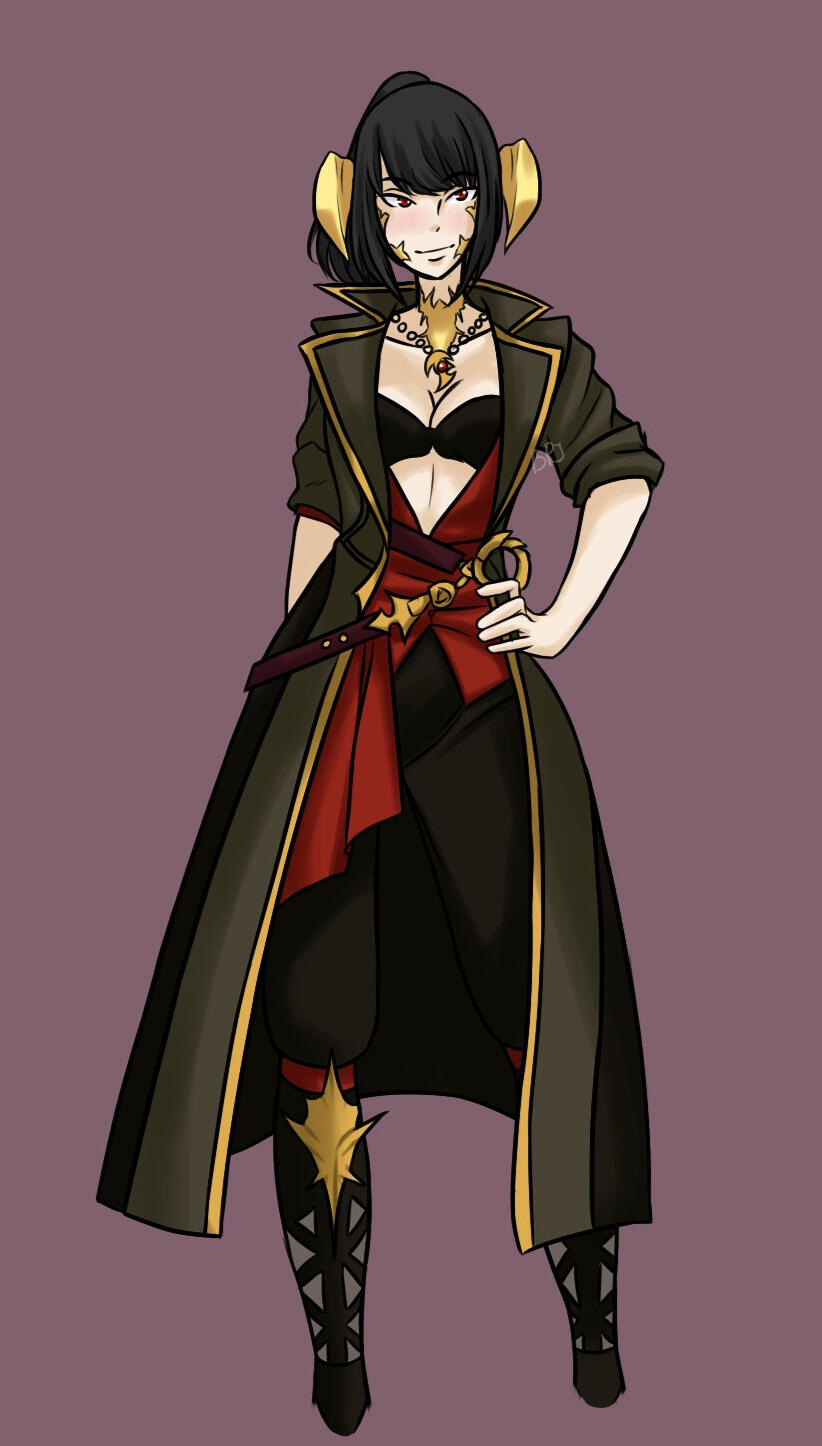 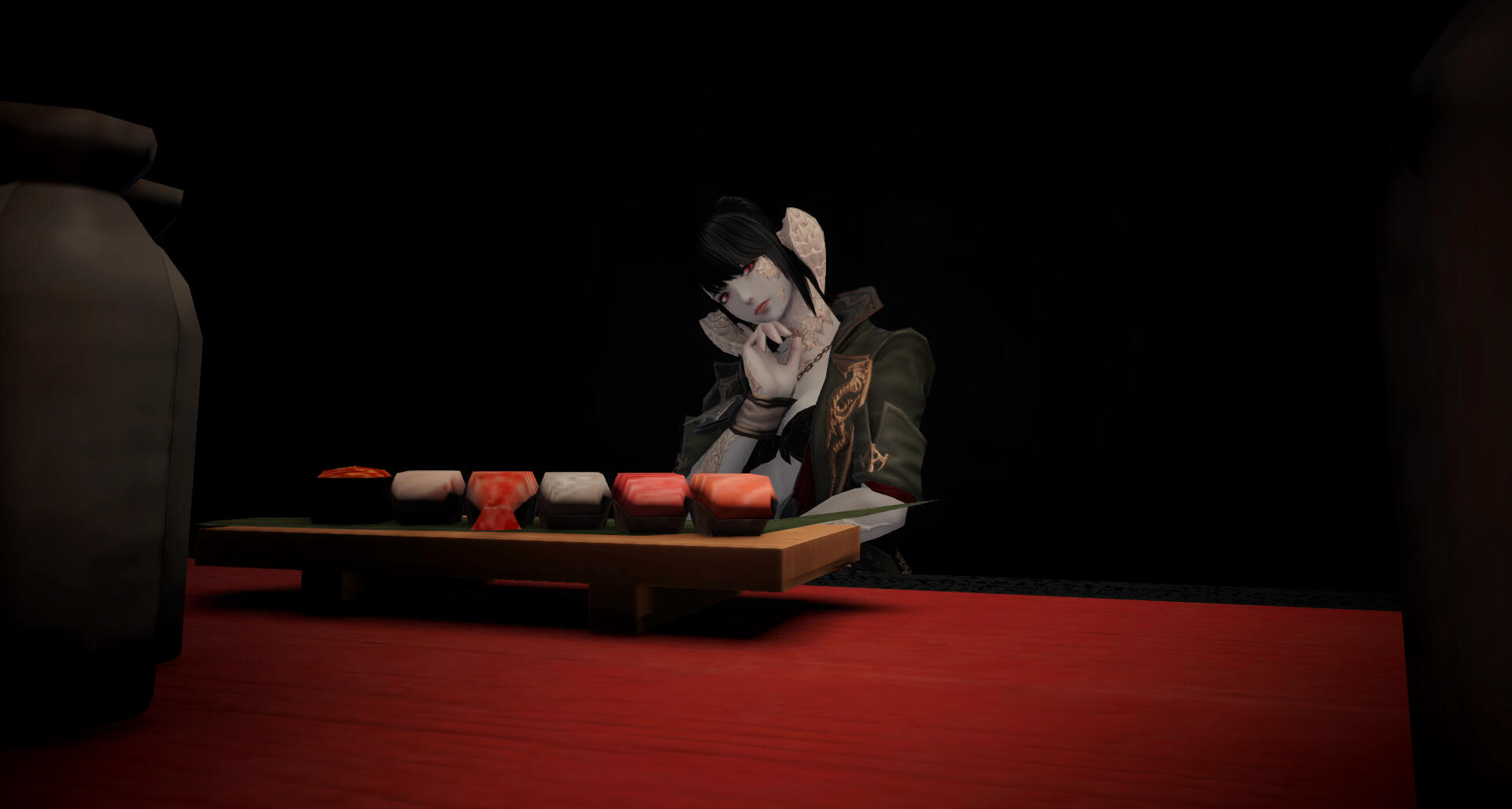 Kasumi can be found striking deals in the markets of Ul'dah or networking at every venue and gathering she can hear about. If you seek her services, look no further than her very own business - The Niten Ichi Tea House in the Mists. (Ward 6 Plot 46.)

Kasumi represents the ways of the Daisho family - a demanding and powerful clan from Hingashi. What is the true nature of the Twin Heavens Tea Company?

Rumors can be found by hitting the button below. 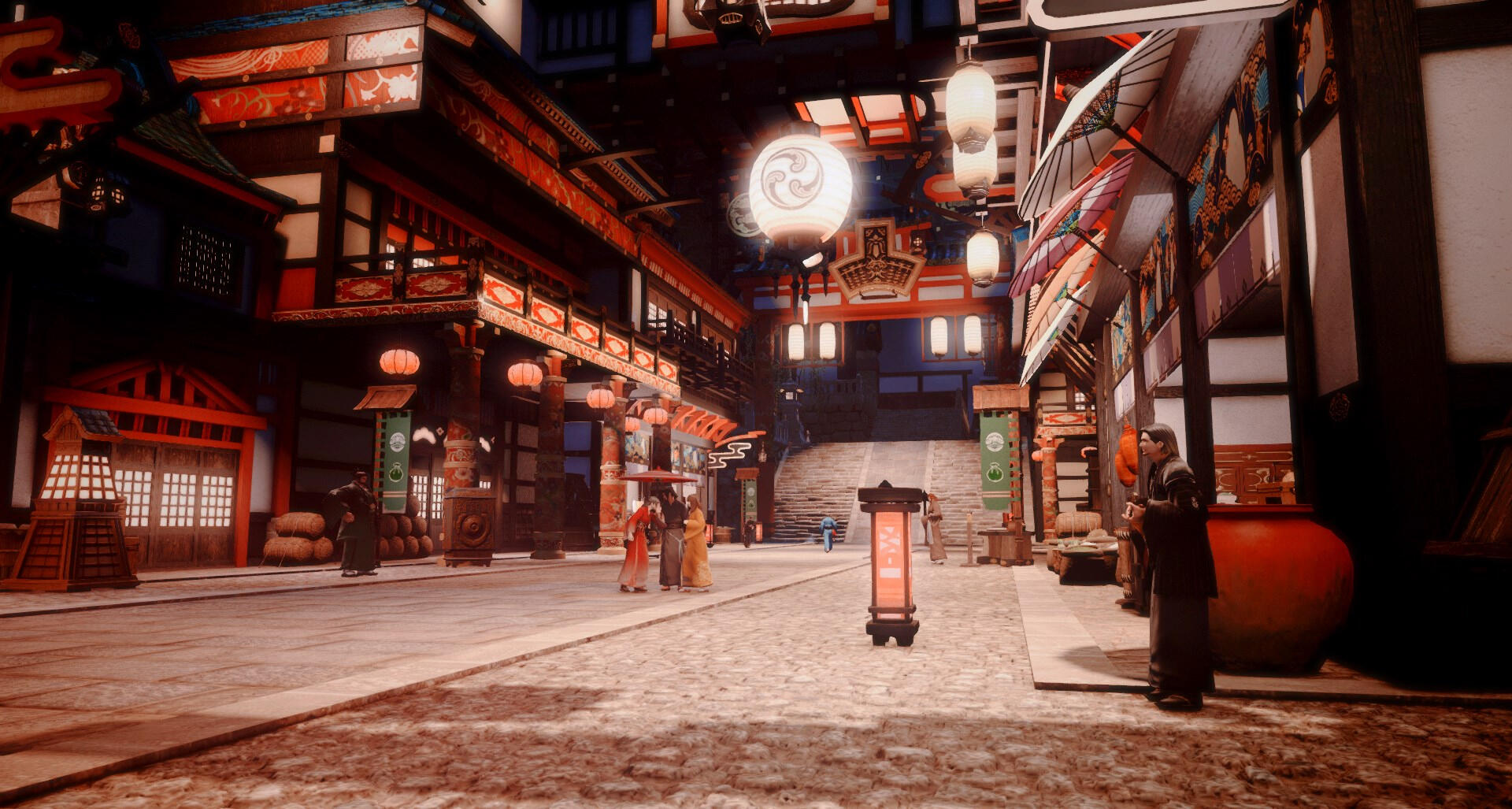 Some of these rumors are untrue, speculation, or exaggerated. Please feel free to let me know if you'd like to add your own rumors.

↣ "That woman is pale as a ghost! Beautiful, somehow..." - Enthralled Ul'dah man
↣ "The little oriental girl - she knew almost everything about my suppliers!" - Wandering Merchant

↣ "You ever see tattoos like that?" - nosy tavern go-er

↣ "That woman's family is nothing but a gang of crooks." - Sour-faced Kugane local

Rumors here can be heard from player characters and a more creative and unique chance to have involvement with other characters aside from Odtuya. If your character has something they would like to say about Odtuya for the realm to know, send me a /tell in-game or message me on discord about it! 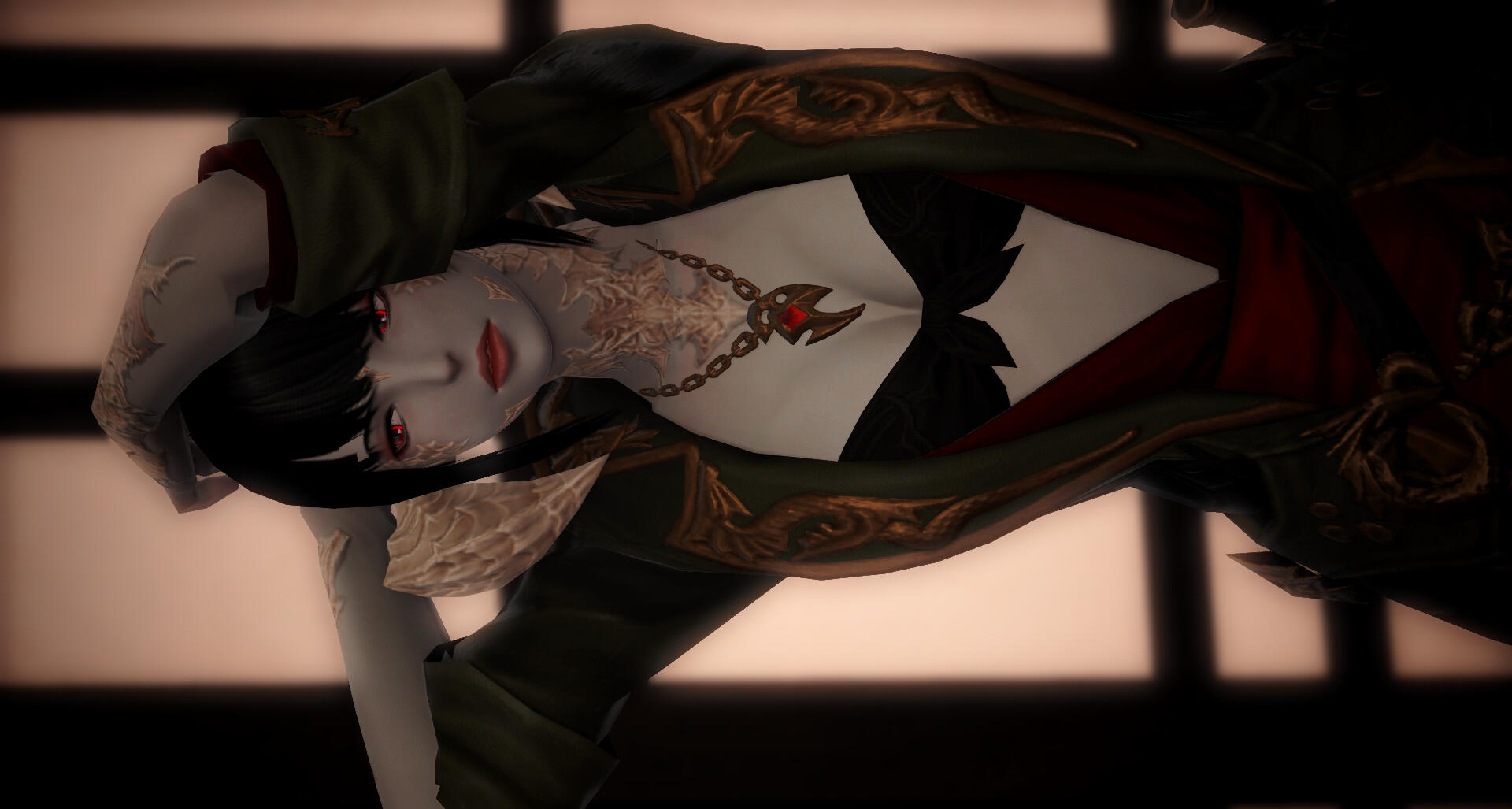 Kasumi is a Raen of 25 cycles, standing at 5 fulms 6 ilms and weighing approximately 110 ponzes. Sleek black hair generally tied into a ponytail with perfectly cut bangs.

Her eyes & lips carry brilliant red hue: Her eyes lined with limbal rings to highlight her gaze in the dim lighting. Her lips carried a matte coat of red lipstick everywhere she went & her eye shadow likewise. Her expression is generally sharp-eyed and serious.

The Raen's body is astonishingly pale, her skin smooth and spotless in an almost ethereal nature. Her figure is curvy at the waist and full at her legs, though she generally wears baggy pants or skirts. Her slender torso gives way to a full chest, not voluminous enough to drag but sufficient to fill her top. 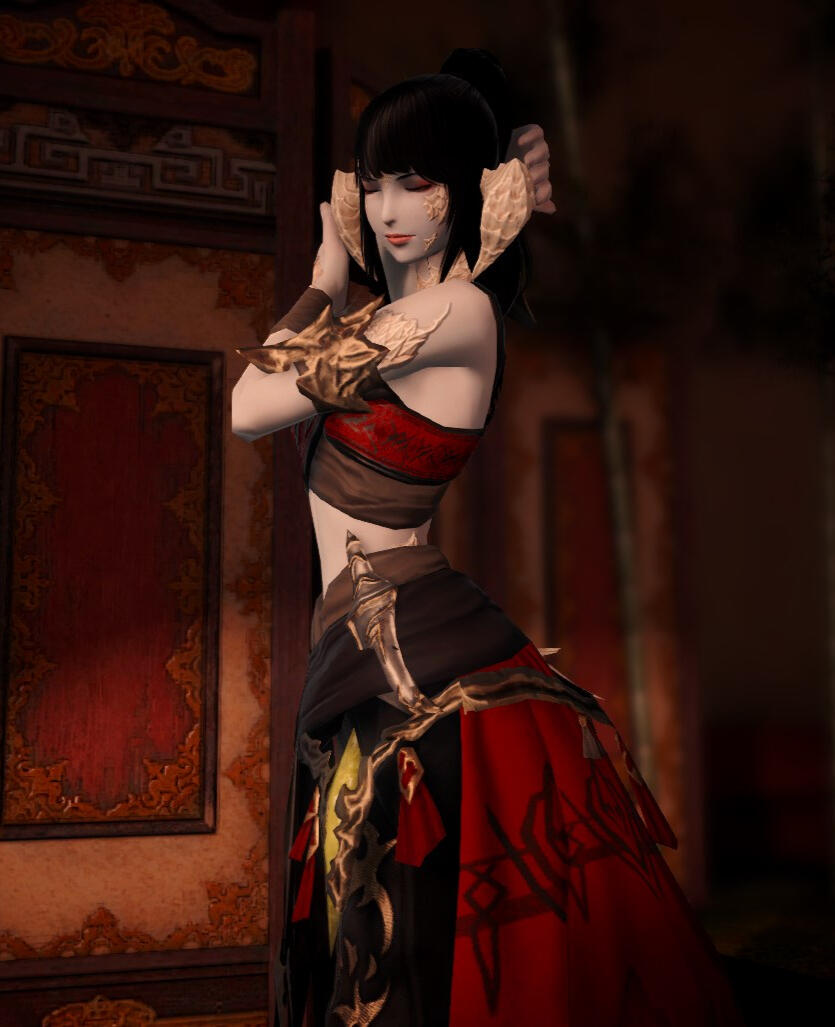 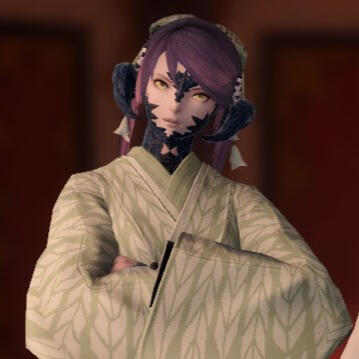 Sokhtai Uyagir:
⁂ ★ ✔ ☮
Sokhtai is Kasumi's closest friend and business partner. To Kasumi, Sokhtai is everything that the company should seek: elegance and brute strength to get the job done in equal parts. She insists on gestures of good will to level the relationship between them, but Kasumi knows that Sokhtai is beckoned to her will.

U'Kettwah Sesmi:
⁂ ★ ✔ ☮
Kett is a dose of Eorzean reality in her life and a reminder of the little she understands about its people. That said, U'kettwah has proven herself to be a valuable partner through her revelatory exploits in the strange ways of Eorzea. 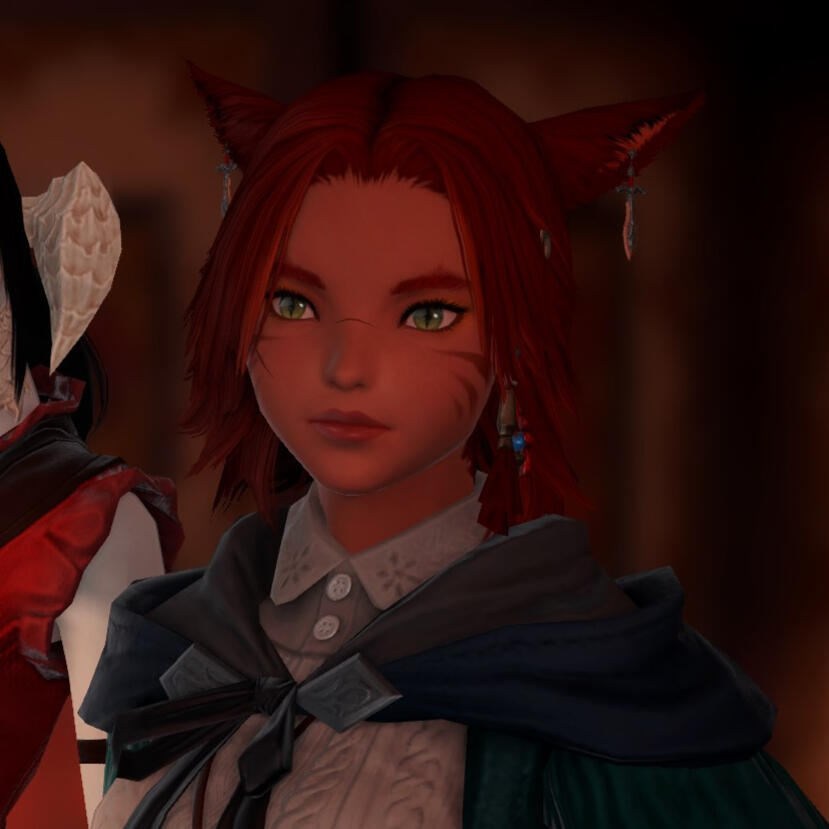 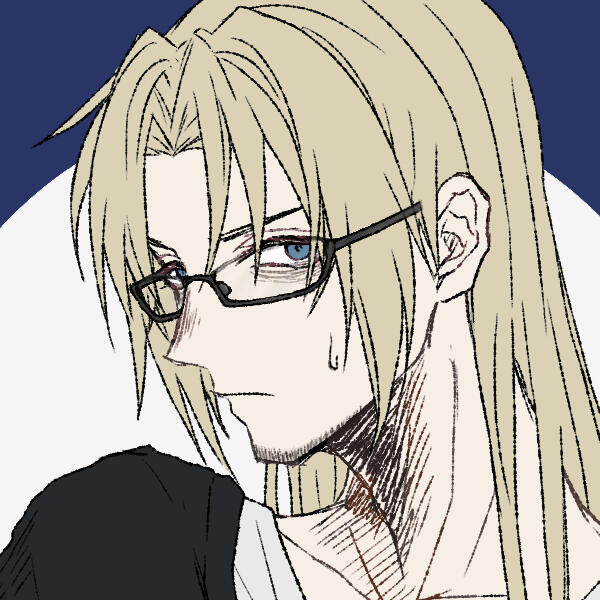 Hello! I'm Shib (He/Him). I've been playing FFXIV for almost two years now and I've been involved in roleplaying for at least the last decade. I'm very open to any kind of roleplaying, but I generally prefer adventures and romances of the extravagant kinds. I'm pretty busy sometimes with my job, college and hobbies, so you can catch me in the evenings during NA hours.

Did you know I stream? It's true! Catch me over at twitch.tv/shiburizu.

A lot of my work for FFXIV is also available at GBL.GG

I will:
Combat RP. One-shot RP. Long-term RP. Dramatic plots. Heavy, feeling-driven plots. Romance. Sexual tension. Serious injury. Temporary injury and incapacitation of mind or body. Temporary captivity or imprisonment. Assassination attempts. Rivalries. Deep platonic friendships.
I will not:
Allow lore breaking. Allow my character to be killed. Injury that will leave my character incapacitated. Allow godmodding. OOCly planned romances, except under special circumstances.
Ask about:
ERP. Torture that leaves behind lasting, long-term effects (aka, longer than 3 months). Long-term and/or permanent injury. Long-term captivity or imprisonment. Significant tampering of the mind. Anything that is dramatically character-changing, or may have extremely negative implications for my character.

Don't be a dick and I'll be fine with you. Don't play something that super breaks the lore and I'll be fine with you. I'm willing to put up with a lot of weird lorebendy stuff as long as you're able to give a reason why it actually matters to your character and isn't just for the rule of cool (even though that's the most important rule). Server drama is stupid and if you get involved in it you're stupid. We're here to have fun, so let's have fun!

ERP/Romance: I want the characters to grow and get to know one another rather than just falling in love inorganically. OOCly planned romances are only something that I'm interested in with people I'm already friends with OOC because I know them. 99% of the time, I prefer to fade-to-black instead of writing out a scene. Once clothes start coming off, I'm out.

Combat/Injury: I am okay with either roll battles or emote battles. All I ask is that you don't godmod and accept the consequences of fighting, and I will do the same!

Template for this Carrd was kindly provided by Lucille Levenson.